In high spirits, every one of us early we rose. Bags packed with things needful for the body, spirit and soul. All the guys had slept in Tola’s house the night before. Tola’s house was literally a home where everyone was welcome. Now we were on our way to the Iddo bus park, none of us knew what to expect.

After the morning hustle that characterizes a typical workday in Lagos, we arrived at the park. We waited for the females, who had spent the night at Yemi’s house. And so they arrived, with the same sort of childlike curiosity beaming from their faces, as was on ours, that blessed Tuesday morning.

By now it was some minutes to seven in the morning. We had located a bus headed to our destination and had tried to secure the best sitting position. Then prayers were made, loved ones were called and snacks bought. With all these we were prepared for a trip every one of us was sure would remain etched in our memories for the length of our lives.

We had proposed to preach on the bus, as this was the whole point of the journey. To proclaim the gospel of Jesus, under any circumstances and in a place we were unfamiliar with. After moving a very short distance, Jesujoba led us in a brief prayer and then the ever bold Yemi started us off with the gospel’s message. After she spoke, it was like every other person from amongst us had something to say on the subject of the gospel’s message. Afterwards, we extended an invitation for questions on the subject we had all expounded on. 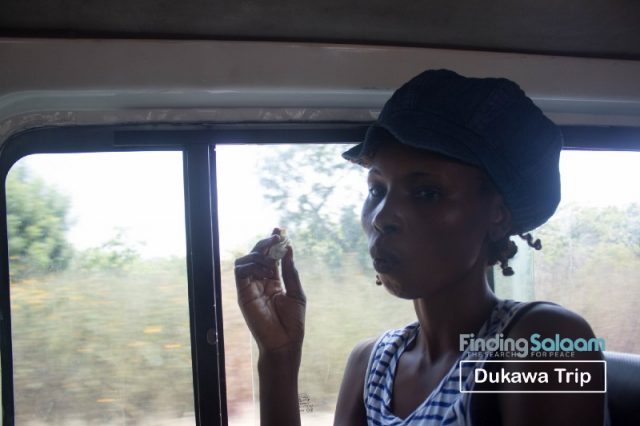 The journey was full of many sites, the most prominent of them being trailers, trucks and narrow roads. It was for most of the trip a battle with heavy vehicles. With our daredevil driver coming out victorious at every bout. We had journeyed a long distance through a number of states and through interesting conversations with Stella.

Stella was a perfect travel companion and guide to the unknown destination. When prompted to speak by one of us, she could go on and on with tales of a northern University strict on dressing and the Niger state terrain. I would remember Stella for her tales, warmth and most importantly for offering me kuli kuli (Not really sure if that is how it is spelt.).

The trip had its moments of sleeping, eating, laughter, reading, storytelling and brief stops. We finally made a more definite stop at Jebba, a city on the outskirts of Niger State. We had made this stop to stretch our legs and have a more substantial meal, for the rest of the journey. This meal would prove very important, for what lay ahead necessitated a renewal of physical strength. 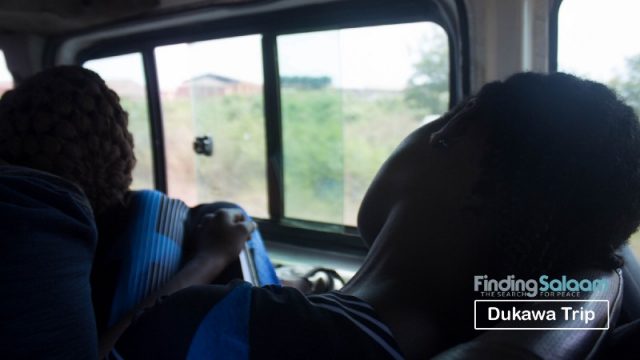 After what turned out to be a lovely meal, in an ambience of safety. We had a brief scare when we were unable to find Yemi’s phone. But praise God we found the phone. The funny device would play the same trick on us during the remaining part of the journey. We hit the road again, in five minutes, we had gotten to Niger. My outburst of joy was short-lived when I was promised by Stella that we still had a long way to go to get to Minna, the state’s capital and our temporary destination.

This would prove very true, as it was another long bout with the big vehicles. Only now our driver and the rest of the passengers had another opponent, the dusty Niger roads. Oh, the dust, brown and intrusive, entering eyes, mouth and virtually every other place we did not want it too. Occasionally on the trip, we came across containers that had fallen off trucks. The Niger landscape and scenery was a sight to behold. With its rivers, mountains, lush vegetation, mosques, northern attired men and hijab-clad women. All the sites contributed to providing a very picturesque view, of what seemed to be a very large state. 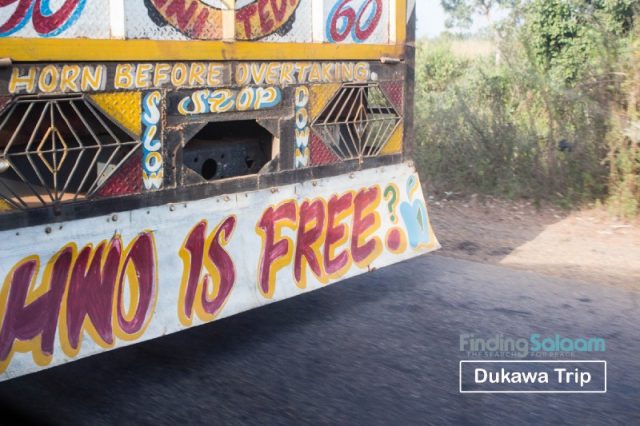 After more than four hours of driving in the dust. A beam of hope could be seen, as we approached FUT Minna. Another outburst of joy by me was corroborated by an assurance by Stella. Finally, we were closer than when we first started. We began to make calls after riding for another half an hour, speaking to those with whom we would pass the night. We dropped off shortly at a place where Stella had advised was our best bet to getting a tricycle to our tentative destination.

After our goodbyes to the awesome people who had embarked on the trip with us and a warm appreciation to our travel buddy Stella. We boarded a tricycle and tried to locate our place of rest for the night. After slight challenges with locating our destination, we finally arrived and were all grateful to God for safety and direction.

Entering the Minna CAPRO lodge, we were not sure what to expect. But as soon as we were in the sitting room, there was no doubt that this was the abode of missionaries’. Unlike the type of artworks you would find in most houses, the sitting room had drawings that gave the beholder a sudden sense of responsibility for the gospel, inscribed on them were instructions such as ‘Go‘, ‘the night cometh’, ‘join Capro to win the world’.

We were then given a treatment worthy of weary travellers, water for starters then a sumptuous meal to follow. Then calls were made to loved ones during dinner, pictures were taken and jokes were shared. Soon the whole house was bursting with life, with men and women, most of which looked advanced in years and filled with joy and excitement to see us. We all had to introduce ourselves a couple of times, as the brethren came to familiarise with the youngsters from Lagos. Many questions were asked and the brotherly love was palpable. We got briefed about the next phase of our trip, then we separated ourselves for a brief time of prayer.

After the greetings and merriment, we were directed to our rooms and we all freshened up for the night. We all became fond of our missionary roommates, but Jesujoba especially had questions about the gospel and the reception of the people in the city. It was indeed a very eventful day since boys were separated from girls, I cannot fully tell what happened at their room, but I am certain they had similar questions and experiences, as we did.

And So The Journey Begins…

Read A Trip To Dukawa -Day 2

A man helped by God, who tells evocative stories.

Recently, popular Actor and movie producer- Yul Edochie, announced on social media that he has a son…
END_OF_DOCUMENT_TOKEN_TO_BE_REPLACED
2
246
9
Share
Faith

There are a good number of great women in the bible. We all know Esther, Rahab, Sarah, Deborah, and…
END_OF_DOCUMENT_TOKEN_TO_BE_REPLACED
2
504
9
Share
Faith