That morning was similar to the one the day before, the kids had woken up early for their devotion. We had our devotion at six as usual, with similar prayer points raised, as the other times of prayer. After the prayers, we were told we had Bible study by eight, at the same place we had the morning prayers.

We went back to our rooms, had our bath and set off to the staff room for the Bible study. As we entered the staff room, we could see some unfamiliar faces. When the prayers started it became clear that the unfamiliar faces belonged to indigenes of the village that had joined us for the Bible study that morning. We prayed briefly and a short message was given from Isaiah 45, brother Samuel one of the teachers and former student of the Christian Learning Center, assisted to translate the English words to Hausa.

The distinct thing about the prayers and teachings that morning was that unlike those that were popular in most Christian gatherings in Lagos, these prayers and teachings centered around salvation of souls and encouragement for missionaries. There was nothing said about material riches and death of enemies. After thirty minutes of prayers and teaching in English, it was the turn of one of the indigenes to teach and lead us in Hausa, brother Samuel helping once more to translate Hausa to English.

The teaching in Hausa was taken from John 19 and the central message was the finished work of Jesus Christ. This section cannot be completed without talking about the Hausa songs and hymns that were sung that morning. Although I did not know the meaning of any of the songs, it was the way they were sung with so much piety and grace, that convinced me that they had deep meanings.

After Bible study, we went for our respective classes and returned during our spare time to have breakfast. Breakfast was yet another meeting with Tom Brown and the accompanying kuli kuli. It was at breakfast we decided that we would preach the gospel to Sunday, as we were required on this day to travel to the villages to relate with the villagers. The thought that we might not get another chance propelled us to perfect our plans to preach the gospel to Sunday.

Also Omono was ready to move to her mission field, so we took some pictures, collected her number and bid her farewell. We would be required to stop by at Omono’s house later in the day, on our trip to the villages. So after breakfast and a long day of classes it was time to speak with Sunday.

A Chat with Sunday.

So Yemi and I set out to find Sunday and have a discussion with him. We found Sunday working in the staff room. We started to engage him in random discussions, we hoped would lead into the gospel. Finally, we asked why he was absent at devotions and he responded, that he was a Muslim. Then we started to probe further into why he was a Muslim, then an intense debate ensued. But Sunday was very open to listen to our ideas and that excited us a great deal. 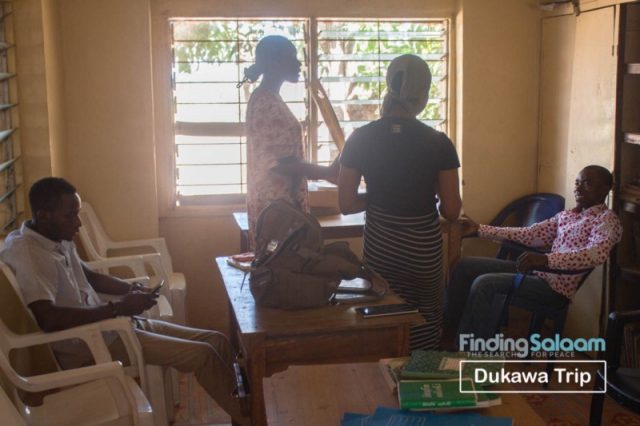 During the discussion, Jesujoba and Chica joined us and what had started off with random discussions became a practical apologetics session. After we were sure that we had communicated all the aspect of the gospel’s message to Sunday. We promised to keep praying for him, for the Holy Spirit to convert him.

Lunch for the Launch.

After we had finished preaching to Sunday, we went to pack the few things we were going to need for our trip to the villages. Cindy had prepared what was going to be the best meal we had had since we arrived at the Christian Learning Center. This meal was going to be very important to us, because none of us knew what to expect, as we got set to embark on the trip. All we could do was guess, based on all the things we had been told about the Dukawa people.

We sat down to have our pounded yam, egusi soup, and watermelon, while we talked about our conversation with Sunday and our expectations for the rest of the trip. After the sumptuous meal, we were ready to be dropped off by Lanre. The car could not take all five of us, so Tola had to be dropped off on brother Samuel’s motorcycle.

The Trip to the Villages.

We started off on our journey and said goodbye to the Christian Learning Center. After riding through numerous portholes and farmlands, we finally arrived at Omono’s house. It was there we got to meet Omono’s husband, grandson and the members of the community who were assisting to translate the Bible into their language. It was at this place we stretched our legs for what was left of the trip to the villages. After many inquiries about the welfare of the missionaries, staff, and students of the Christian Learning Center, Omono’s husband made negotiations for the bikes that were to take us to the villages. After the negotiations were complete, we took more pictures with Omono. We appreciated Lanre, brother Samuel, Omono and her husband, then we mounted the bikes like gallant soldiers, going to an unknown territory. 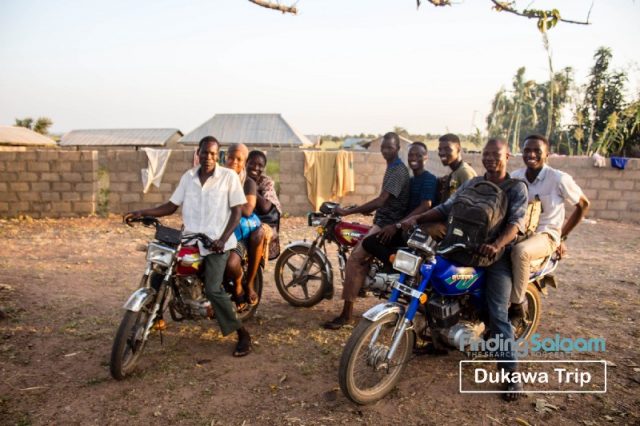 Thus we began what was left of our journey to the villages, the girls were to be dropped off in a different village from us. About 20 minutes into the trip we realised why we had to make the trip on bikes. The road to the villages seemed impassable to any other means of transportation asides motorcycles. The roads were very narrow bush paths, so narrow that we got flogged several times by the vegetation to the right and left of the path. Occasionally while on the way to the villages we would spot cattle being led by young boys or men and women holding farm tools. After about 45 minutes, we arrived at the village where the girls would be staying.

They were led into a compound with mud houses, we said goodbye and continued to our own village. After about twenty minutes we arrived at Burkake, we were then introduced to Timothy one of the village’s church elders. Timothy could not speak English, as most of the villagers we came across. Getting down from the bikes, I realized that my hair and beards had become brown from the dusty ride.

Ba Hausa and the Jewels in the Sky.

After we thanked our bike men for bringing us, we followed Timothy to his compound and like all the other compounds in the village, it had mud houses and silos (rumbo). Timothy offered us water and tried to start off conversations in Hausa, three of us responded in unison ‘Ba Hausa’, meaning we did not speak Hausa. Timothy found this very funny, as he laughed, we would be required to say more ‘Ba Hausas’ that night and during our stay at Burkake. As the night darkness drew near, we were led to the compound of another church Elder, this is where we were to pass the night. 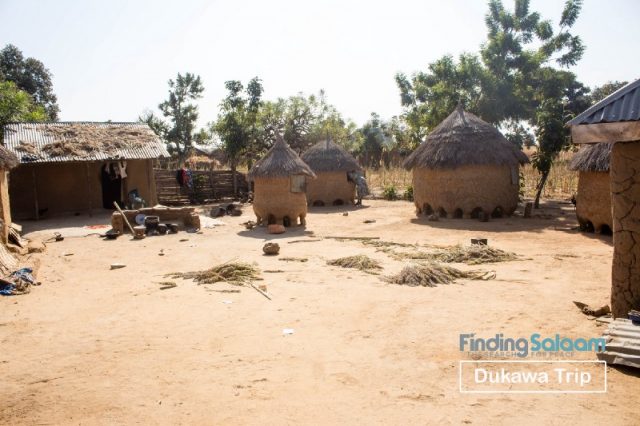 We were given mats to lie on outside the huts, while we waited for dinner to be served. As we lay on the mats and had casual discussions about the things that happened during the day, we noticed the beauty of the night sky at ‘Burkake’. My Lord, it was such an awesome sight, how I wish our camera was sufficient to take a good picture. The stars dotted the dark sky in a way that seemed to draw images, God must have a paintbrush no doubt.

We were given sugarcane before dinner was ready. After about ten minutes dinner was ready and we were served a big bowl of rice with small pieces of fish, we responded with ‘Nagode’ (this is what I said and I had no way to verify if it was correct, but I meant to say ‘Thank you’ in Hausa). After we had eaten, we got introduced to Matthew, Matthew understood some English and was our Hausa teacher and interpreter for the night. We then had one of the rooms in the hut cleaned for us to rest for the night. It was a small room, that had a bed made from dried plant stocks tied together, with a mat placed on it and another flat mattress spread on the floor, it also had posters of political aspirants on the wall. This was going to be our place of rest for the night. We packed our bags into the room and slept almost immediately.

So The Journey Continues…

if you missed it.

We have another intriguing story you would enjoy, click here to read SHADOWS #1

Recently, popular Actor and movie producer- Yul Edochie, announced on social media that he has a son…
END_OF_DOCUMENT_TOKEN_TO_BE_REPLACED
2
235
9
Share
Faith

There are a good number of great women in the bible. We all know Esther, Rahab, Sarah, Deborah, and…
END_OF_DOCUMENT_TOKEN_TO_BE_REPLACED
2
497
9
Share
Faith