“To those who already have Jesus, you have made the best choice and are in the best team. Go ahead. Do not give up. The fight is great, but we can only win being on Jesus’ side. To those who have not yet surrendered their lives to Jesus, what are you doing being outside of this team? Come to learn the word of God, come to know who God really is.” – KAKA

To me personally this man is a footballer, an athlete and a sportsman in christ, a man of humility, a man of the bible, even with so much accolades and honous accorded to him, he has remained humble and soft spoken, never failing to attribute his success in his footballing career to God. Let me just go ahead and introduce this football maestro, we football lovers fondly refer to as KAKA. 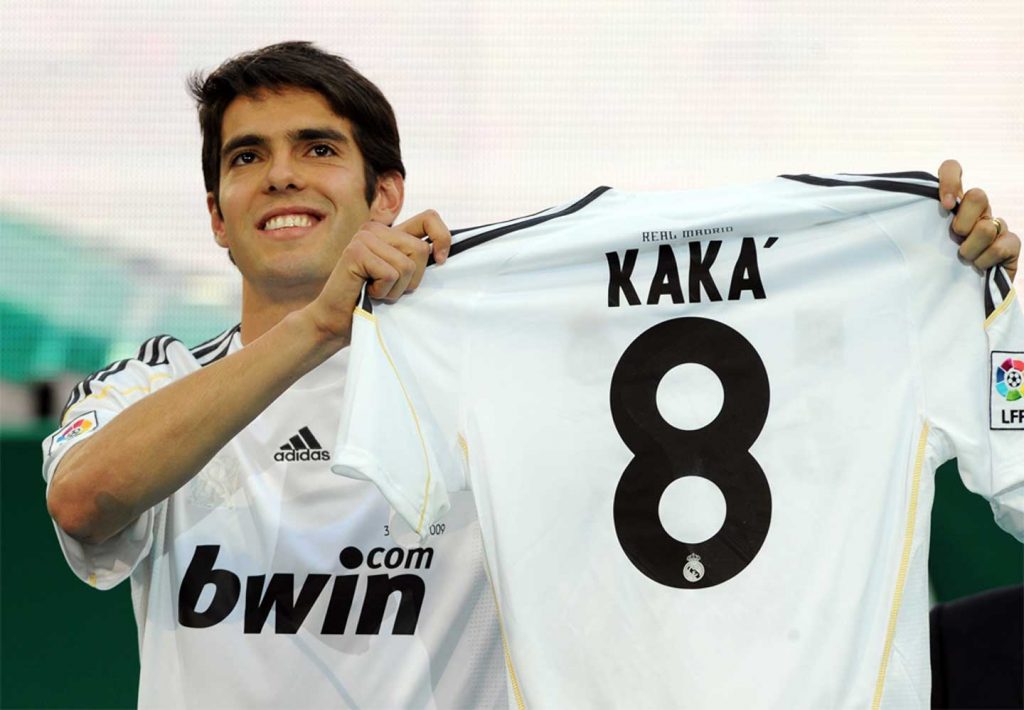 For those of us who are avid followers of the sport, football, this man needs no further introduction as some of us are aware of his prominence on and off the field of play. He dazzled so many on the field of play with his speed, agility, dribbling and scoring abilities, scoring so many goals in the process for his country and in the clubs he played in. Off the field of play, kaka is known for his outspoken faith in Christ usually using the scriptures of the bible as a reference point to buttress what he has to say.

Kaka was born in brazil to Bosco Izecson Pereira Leite and Simone Dos Santos. The name Kaka which he is known as was given to him due to the inability of his younger brother to pronounce the name ‘ricardo’ and instead pronounced it as caca when they were young. He had good Christian and financial upbringing which gave him the ability to focus on both school and football at the same time and at the age of 12 he was baptized.

Many of us do not know this about kaka, he suffered a career threatening  accident and spinal fracture from a swimming pool accident but he fully recovered. He attributes his recovery to God and said that it was his recovery that made him draw closer to God at the age of 18.

For his contributions on and off the pitch, Kaka was named in the time’s 100 list of the world’s most influential people in 2008 and 2009 and was the first sportsperson to have up to 10 million followers on twitter. Due to his performances in the club AC Milan where he played from 2003 – 2009, he received both the FIFA world player of the year and also the Ballon d’or award in the same year 2007, that same year also he helped Ac Milan win the Uefa champions league where after the game he went down on his knees and revealing his inner shirt that had the caption “I belong to Jesus” raised his hands up to worship God. 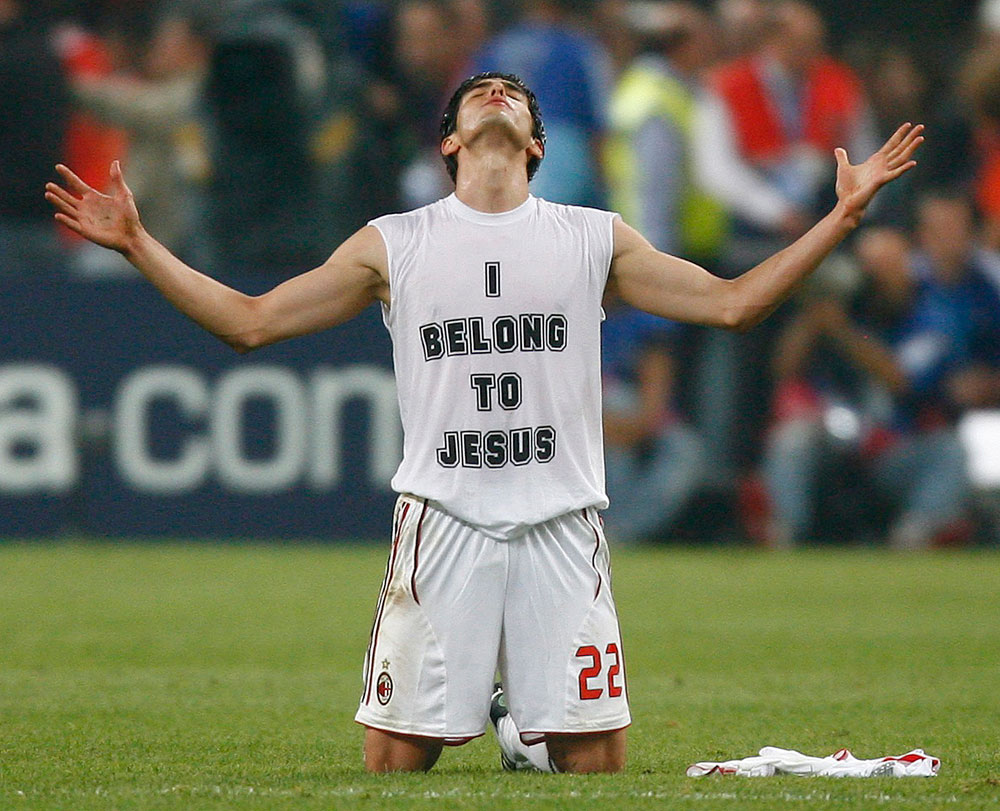 Although during the latter part of his career especially his time at the club real Madrid, he had injury problems which made him miss a considerable amount of matches at the club, and also due to some irreconceivable differences, he and his wife got divorced but says they still remain friends. But even with all these challenges and difficulties, he has continued to be an inspiration to so many especially to some of us Christians.

In an interview  about becoming one of the best in the world he said “It may seem that I have everything. Due to my wealth and fame, some people ask why or if I still need jesus, the answer is simple: I need Jesus everyday of my life, his word , the bible, tells me without him, I can’t do anything. I really believe that. The ability I have to play football and all that has resulted from it are gifts from God. He has given me a talent to use for him and I try to improve on it everyday.” ( https://www.cru.org/communities/athletes/world-cup-2014-kaka.html)

He has said that his habit of pointing his fingers up to the sky to thank God after a goal and his religious inscriptions on his shirt is “simply to tell the world I belong to Jesus.” He has also had some inscriptions promoting Jesus on his boots. 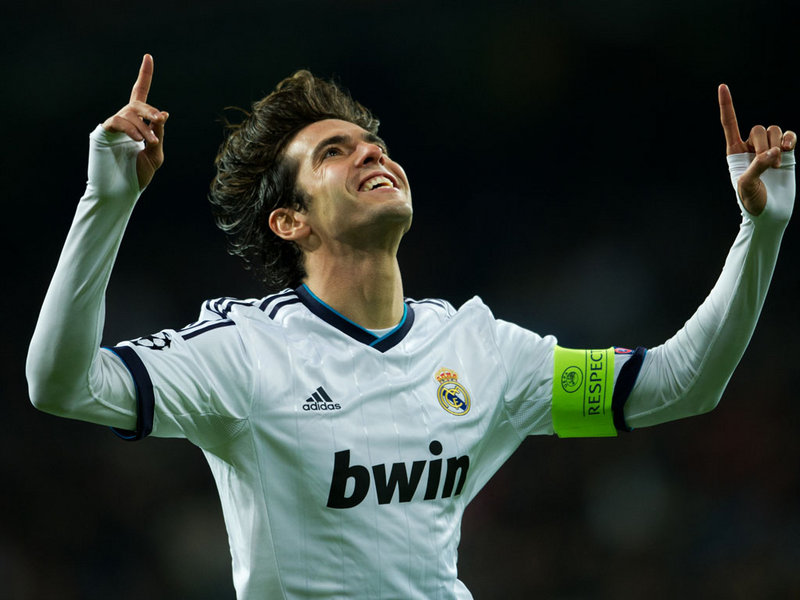 If there’s one thing I have learnt from Kaka’s profile, it is that God has not only given us talents and gifts to make wealth but mainly as Christians to be people of impact and influence proclaiming the gospel of jesus Christ and drawing those who are lost to the knowledge and saving grace of Jesus Christ.

I learnt that it is faith that decides whether something will happen or not. Click To Tweet

If things happen it’s because God has prepared me. God has great things for us. If it’s God’s will that I’ll be there, there I will be. Click To Tweet

Thank you for reading and God bless. Kindly leave a comment, it will be good to read one from you.

I consider myself a deep follower and lover of various sports but not American football. First of…
END_OF_DOCUMENT_TOKEN_TO_BE_REPLACED
0
140
0
Share
Sport

“My Faith is the most important thing. I believe that the moment I had a very personal…
END_OF_DOCUMENT_TOKEN_TO_BE_REPLACED
0
651
0
Share