He is one of the few outspoken Christians in the world of sports. In fact for me, he is the most outspoken Christian sportsman I have ever come across. He is a boxer, (yep, I know some of you sport lovers know him already). But I tell you he is not only into boxing. Ladies and gentlemen let’s make welcome Manny Pacquiao (*applause*) 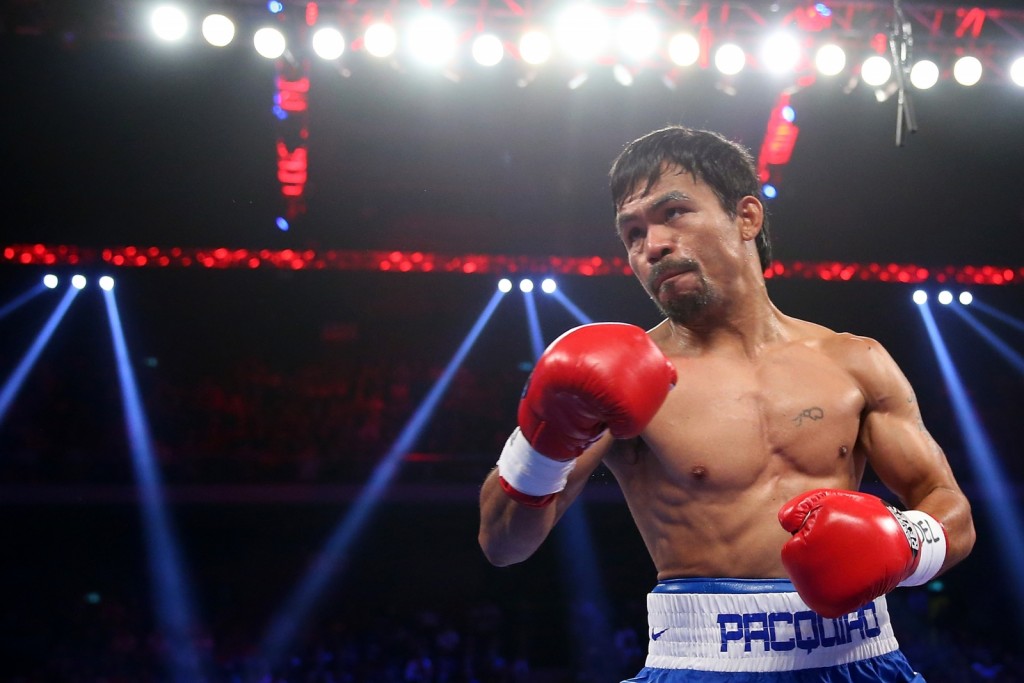 This man here needs no further introduction, at least in the sporting world, as he is well known not only for his excellent boxing skills but also his outspokenness on his Christian faith.

Manny Pacquiao was born on December 17, 1978 to Rosario Pacquiao and Dionesia Dapidran-pacquiao. He was raised a roman catholic. Manny Pacquiao is married to Jinkee Hamora and together, they have five children. He is an evangelical protestant and he goes all out for who he believes in –Jesus Christ. 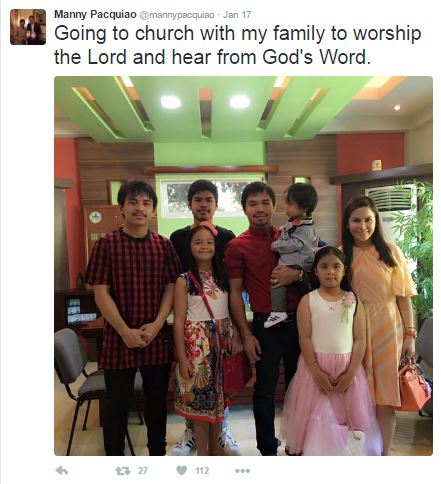 The first thing I noticed about this great man of God is his diversity in some areas of life. Apart from being a boxer, Pacquaio was once a basketball player- even with his small stature.  He also served in the Philippine army where he achieved the rank of lieutenant colonel. He is an actor, musician and lastly a politician and is currently a member of the Philippine House of Representatives (mehn, only one man).

Unlike most prolific boxers who are known for pride, boastfulness and frivolous spending, Pacquaio is a humble and clear-headed person who has dedicated his life and all that he does to God so much so that when he is not in the boxing ring, he is invited to conferences both in his home country and abroad to come and preach the good news of Jesus Christ. 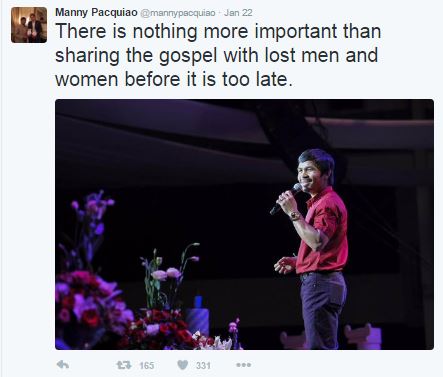 However, there was once a time when Pacquiao, by virtue of the money he was getting from fights, usually patronized alcohol, women and gambling. According to theguardian.com, he was once was an all-night hound dog, taking his pleasure where he pleased, ignoring all advice to respect the sanctity of his marriage vows and determined to squeeze as much fun from life as was available to someone who was born into poverty. Even Pacquaio himself admitted in an interview with CBN (Christian Broadcasting Network) that “I went to church on Sunday, but from Monday to Saturday I was in the bar drinking”. In his own words, he also admitted that “careless words came out of my mouth. I committed adultery. I didn’t care”.

This just goes to show that there’s no one God can’t change. 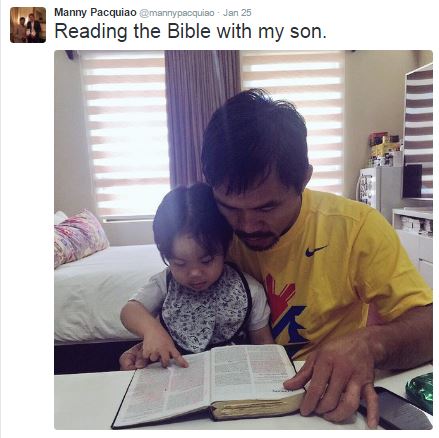 In an interview on the 16th of February 2016, when asked about his views on gay marriage, he replied saying he believed that people in gay relationships are worse than animals (was he not correct in saying so?). He pointed out that even animals of the same sex don’t engage in such relationships. This caused such an outrage on the social media against Pacquiao to the point he lost his sponsorship from the popular and giant sports brand, NIKE. Pacquiao later apologized but did not back down on his anti-gay marriage stance. 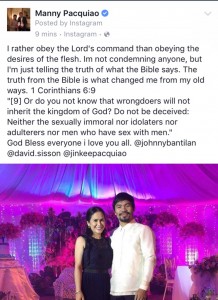 So much has been said about this man and I am personally encouraged by him. He is someone who has refused to give in to the pleasures and pressures of this world no matter the cost. What is more encouraging is that this is coming from a boxer.

“Being a Christian means accepting Christ as your savior, your God. That’s why you are called a ‘Christian’. If you remove Christ, there’s only ’ian’ and that means ‘I am nothing’ ”

In conclusion I have learnt from Pacquiao that no matter where we find ourselves in life, as Christians, we should be embodiment of Christ. Even though we live in the flesh, we are not of the flesh but spirits and the Holy Spirit is always there to help us through any temptation, test or persecution. 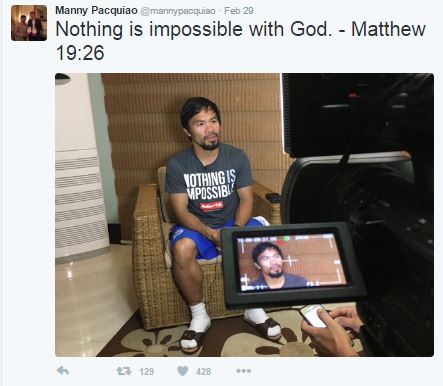 Manny Pacquiao has shown that our working place, career or profession can be an avenue to draw people to God (Matthew 5:16)

Recently, popular Actor and movie producer- Yul Edochie, announced on social media that he has a son…
END_OF_DOCUMENT_TOKEN_TO_BE_REPLACED
2
314
10
Share
Faith

There are a good number of great women in the bible. We all know Esther, Rahab, Sarah, Deborah, and…
END_OF_DOCUMENT_TOKEN_TO_BE_REPLACED
2
581
9
Share
Faith