Lessons from the 2016 GLO CAF awards 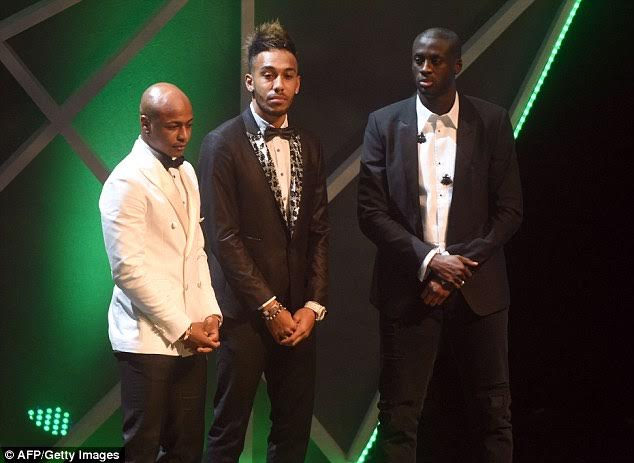 The Glo CAF awards where the best footballers from the African continent are awarded king or queen of football was held on the 7th of January 2016 in the capital city of Abuja, Nigeria at the international conference centre(ICC).
We all know that the award every football fan/analyst was looking forward to and kept them on the edge of their sits was the African footballer of the year which was keenly contested by three outstanding players in their own rights.
Andre Ayew (Ghana) who plays for the Ghanaian national football team and also plies his trade for Swansea city fc of wales. His father (Abedi Ayew a.k.a Abedi Pele) has also been a recipient of the presitigious award three times.
Pierre Emerick Aubameyang (Gabon) who plays for the Gabonese national football team and also for Borussia Dortmund fc of germany and finally
Yaya Toure (Cote d’ivoire ) who plays for the Ivorian national football team and Manchester city fc of England. Yaya toure is the 4 times consecutive winner of the award from 2011-2014.
Most analyst would say the battle was between Yaya toure who helped his country win the African nations cup and  was looking for his 5th consecutive award win and Pierre emerick aubameyang who helped his club come out of the relegation zone to finish 7th on the league table at the end of the 2014/2015 bundesliga season.
So when the winner of the award was finally announced it was little or no surprise to football fans that it was aubameyang who was crowned the king of African football of the year 2015,

And here is a brief reason why’

From these few points. It is evident that it was no fluke that Aubameyang won the award, but beyond him winning, I could not help but marvel at the scene just before the was announce, or rather when the first runner up was announced.
All the 3 finalists standing up there, two first time nominees and 4 times winner of the same award, then Yaya Toure was announced as the first runner up, the most decorated of the three. it got me thinking and left me with few wisdom for life.

But wait ooo, before I end this post let me come to a more biased aspect , as a Nigerian football fan I wonder why none of our footballers were nominated for the top 3 and I think the answer is plain and simple, they are not doing enough and are not as committed as the other players who where nominated but thanks anyway to Victor Osimhen (winner and top scorer of the u-17 world cup championship in 2015) and Oghenekaro Etebor where both won the young African player of the year and most promising African talent of the year award respectively, that somehow saved our blushes.

But anyway I am keepin a close eye on a Nigerian player who is gradually gathering attention and hopefully if he is consistent might be a contender for the next award, he is Odion Jude Ighalo of Watford FC.

I bet you can pick a thing or two here, feel free to contribute a lesson as well.

Check out the othe sport post on Lifegiva by CLICKING HERE

I consider myself a deep follower and lover of various sports but not American football. First of…
END_OF_DOCUMENT_TOKEN_TO_BE_REPLACED
0
140
0
Share
Sport

“My Faith is the most important thing. I believe that the moment I had a very personal…
END_OF_DOCUMENT_TOKEN_TO_BE_REPLACED
0
651
0
Share