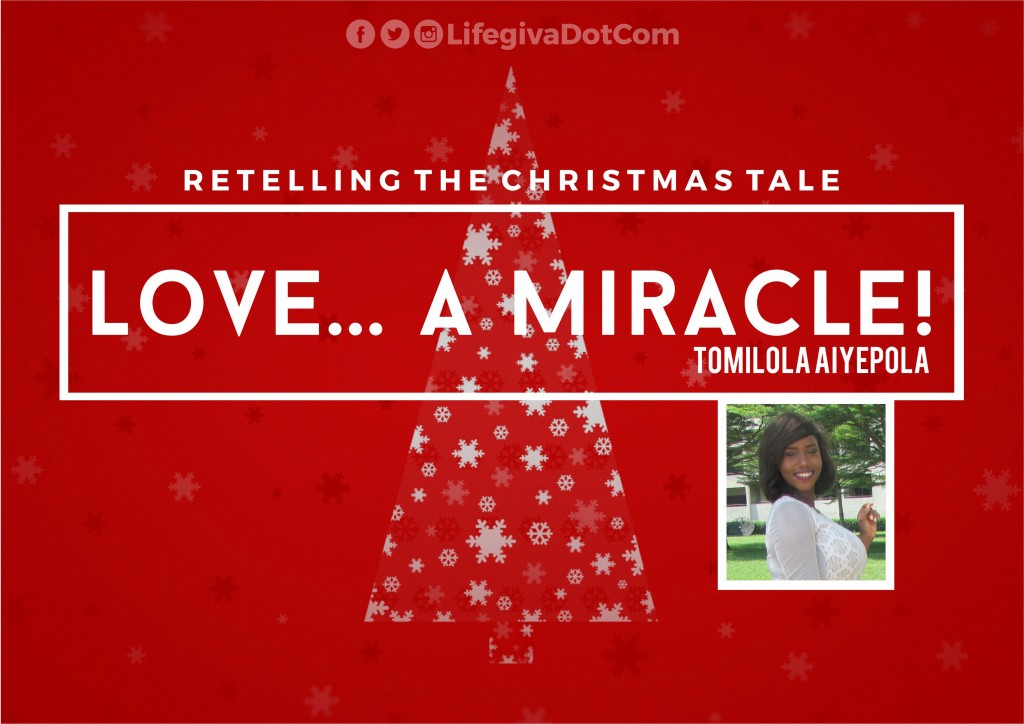 This is the story of the birth of Jesus written in a contemporary manner from the perspective of Mary and Joseph whose love played a major role in the birth of the saviour of the world. I believe that if it was Adina and Gidon, Eliana and Chanan, Keren and Eldad or any of the tons of other Nazarenes instead of Mary and Joseph, then this story just would not be the same.

After I saw the way he stormed out, I just knew everything was wrong. At the same time I could not deny the conviction I had. This was indeed God. My mind flashed back to Elizabeth. Did she really mean it when she said her baby kicked in response to my voice?  I could not think straight. I kept asking why this decided to happen to me of all people. My mind went so far I began to wish and wonder, What if I was like those Canaan women?, What if I didn’t decide to keep this thing called virginity that has put  me into this mess and maybe cost me the love of my life? I tried to tell myself it was okay but deep down I knew it wasn’t.

Joseph had done so much for me. He had sacrificed so much for me and now I’ve hurt him like this or at least he thought I did. I would never hurt him intentionally. I love him and I would never want to lose him. I don’t….. My thoughts were cut short by the knock at the door. I rushed to check who it was. I tried to gain my voice as I came face to face with him upon opening the door. “I…” “You…” we both trailed off. I was looking into his eyes so intensely searching for an answer when he pulled me into a hug. That was the best of an apology I could get from him but I wasn’t bothered about that, not now. I was just so happy he came back. He understood, making me love him all the more. “Thank you.” It was me who spoke. He only responded by hugging me tighter. Moments later, I heard him say still holding me, “He’s a special child Mary. He’s going to save the world.” I knew immediately that I had the right person to stay with me through everything.

It was over eight months since this baby started growing in me and with me. Joseph was with me all through of course. I was scrolling through my Twitter when I started seeing the hash tags #RomanPopulationCensus #CaesarAugustus and so on. I was still trying to get to the real news when Joseph pinged me. We had to leave Nazareth to go to his hometown, Bethlehem in Judah for the population census. It was a long journey because there were no airports in Bethlehem. We had to go by road. Joseph kept asking to know if I was comfortable all through the journey. Of course I was not totally comfortable with my protruding stomach and aching back but there was really nothing he could do so I kept telling him I was fine. We finally got there and I could not wait to stretch my legs as we parked in front of a hotel. Joseph had gone ahead while I was tagging along a little far behind him. By the time I almost got to the entrance, I saw him coming back out. “What happened?” I asked when he reached me. He told me how there was no available room since everyone was in town for the census so we left to try somewhere else. We went to about four hotels and we kept getting the same annoying response. I felt very apprehensive already. We were at the fifth hotel receiving the same bad news when it happened. My water broke. Disoriented could not explain my disposition at that time. What was I going to do? What was going to happen to my baby? He is supposed to save the world. I faintly heard the receptionist telling Joseph that the only available space was in a garage out back that had not been used in years and had in fact been turned into a place for domestic animals. I was already in labour as Joseph held me with the receptionist leading us to the garage. I still don’t know how it happened or how we did it but about an hour later, I was holding in my hands the most beautiful baby in the world. Joseph wiped the tear drop of joy from my eye as we both looked at him. Just as the angel directed, Joseph called him JESUS. There was nowhere to put him and I knew I couldn’t carry him all day long when Joseph pulled out one of the feeding troughs of the horses and I placed him in there on the bed of hay wrapped in swaddling clothes. I could not take my eyes of this treasure that had not only been given to Joseph and me but had been given to the whole world. I was snapped out of my reverie by Joseph’s voice as I heard him calmly say “Get ready Baby Jesus, it’s time to save the world!”

Day 4 November 17, 2017 Prayer Culture Shock. That morning was similar to the one the day before…
END_OF_DOCUMENT_TOKEN_TO_BE_REPLACED
287
0
Share
STORIES

Day 3 November 16, 2017 Morning Prayers and Assembly By five in the morning on this day, the…
END_OF_DOCUMENT_TOKEN_TO_BE_REPLACED
197
0
Share
STORIES