Trending
Should I Quit My Job To Pursue My Passion? Healthy Ways To Deal with a Breakup Five Ways to Fight Sexual Sin How to Maintain a Vibrant Spiritual Walk Dear Struggling Believer
STORIES 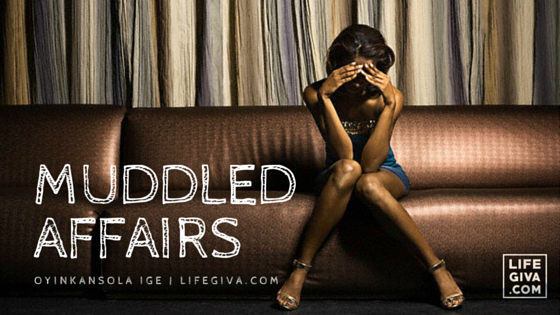 Chief Gbade sat in his multi sized living room, with blue drapes and white curtains. The television was on CNN and even if he was staring at the television, his mind wandered afar off. Thoughts of his best friend, Segun’s daughters- Jade and Simi filled his head. How could he be so stupid? He wondered. He should never have slept with Simi, the younger one with the voluptuous body and seductive smile. He grinned at himself when he remembered the first time he saw her naked in his private chambers.

What is this world turning into? He asked himself. He was supposed to be like a father to her, not her sugar daddy. They had gone on several love trips in the guise of trade trips to Dubai and holiday trips to Paris. Jade would never have noticed, so he was shocked when she called him and hurled abusive words at him, calling him a pedophile and a beast who had no regard for family in any way. Maybe Simi ended up disclosing their affair. But she wouldn’t be so silly would she?

“Honey, you’ve been staring into space for hours”, his wife, Amelia said as she came down from the stairs in her blue gown. She looked ravishing as usual. His money was definitely doing the trick on her.

“Yes, yes”, he replied, as he sat up and looked at her. He smiled to himself. ‘I married a beautiful wife’. “My mind has been in different places dear” he said as he put his hands on her protruding stomach. “You look beautiful even in your baby state dear”

“Gbade all these sweet words though”, she replied ad she kissed him lightly. “I’m fortunate to be with a man like you darling”, she replied as she looked at her wristwatch.

“Not exactly”, Amelia replied, smiling. “Speaking of which, I want to invite Simi over…”

Gbade’s face froze almost immediately. It was a good thing Amelia didn’t notice, contrary to her intuitive nature. “Why?” he asked non-challantly.

“She has always had a thing for babies, and I want her to know one or two things about how pregnancies could be, plus I could do with some company”, she replied, smiling again.

Gbade’s mind began to travel places. What if she finds out? What if Simi tells her? What if Jadesola tells her? Should I tell her? No.  It would be dangerous. Sleeping with my best friend’s daughter, someone old enough to be my daughter? It would break Amelia.. She could lose the baby. …she could.

“Honey, are you listening to me?”

Gbade came back. “Oh yes my love, please invite her over. We could do with some additional company quite alright.”

“Yeah!”. She sounded like a teenager. She kissed him again and got up. “I’ll call her tomorrow evening. She complained of a fever when I called her last week. I hope she is better”, Amelia said as she flipped her hair backwards.  She went into the kitchen looking so excited, while Gbade sat and wondered why his life was suddenly going downhill.

Suddenly, he realized he should never have looked Simi’s way at all. He should have just been content with Amelia.

He should have. Now he was in deep trouble.

Amelia walked into the kitchen. She knew something was amiss. Gbade wasn’t as excited as he would be on a normal day, and he had been in his thoughts lately, forgetting to put off the television, falling asleep in the parlor, not wanting to touch her. At first she waved it off because he was an old man who needed rest, but now, she wasn’t sure her conclusions were right. He definitely had a lot on his mind. She remembered her conversation with her best friend, Seida.

“I saw him with one young girl like that last week”, she had said.

And she didn’t believe Seida. He could have been with a young girl, but he knew his intentions would be noble. He enjoyed the company of young people, Simi could testify to his benevolence and kind gestures. That’s why she loved Simi. Simi knew how to carry her husband along. And somehow they had become family.

‘Is he seeing someone else?’. She asked herself. She couldn’t think of the possibility. Maybe Simi will know. I mean, he’s her dad, literally. She thought as she picked the phone to call Simi.

The number you have called is currently switched off was the response she got.

“I don’t like this”, Madame Ben said as she paced round the church office. Jadesola’s head was on the table, she had been crying since she got into the office.

“If it were someone I didn’t know, it would have been better.  But my own blood…he’s sleeping with my own sister. What is this world turning into aunty?” She asked amidst Sobs.

“Hush my love” Madame Ben replied as she came and held Jade. “The human race is fallen, we can’t afford to expect too much from anyone… “

“She’s my sister…how could she?”

“You need to relax, Jade. We do not know what really happened. And you say you don’t want to ask any of them?”

‘No, ma”, Jade replied. “It will look like I have been snooping around. Besides I want to get a clearer picture of things.”, she concluded as she cleaned her face.

“Okay dear.”, Madame replied as she saw Jade to the door. “The Lord will fight your battle child just hold your peace..”

“There’s nothing else I can do mum. All the fight in me is gone. With an unfaithful husband and a reckless sister, and a perverse generation filled with men who no longer set the right atandards, I’ll resolve to prayers ma”

“There are still a few good men, Jade”

“I’m afraid my husband isn’t one of them. Goodbye ma”.

With that, she walked out of the church office, while Madame Ben stared at her, with no idea of what to do. In the end, she closed the door, went on her knees and began to pray.

Jade began to think again as she started the car. She tried playing some of her favorites- Christy Nockeles, Kristen Di Marco and Audrey Assad, but the songs made her cry harder. She stopped the music player and headed for home. Her phone rang and she prayed it wouldn’t be her sister or her husband or even Chief Gbade.

Chief Gbade’s wife? Why is she calling? Jade wondered as she parked the car and pressed the green button.

“How are you my dear?” Jade asked, trying to sound happy.

“Not too good, ma” she replied like she had been crying.

“Oh…”, Jade replied as she placed her hand on her temple. ” what’s it? Is everything okay at home dear?”

She could hear Amelia sobbing, and she wondered why the pretty lady would sob over the phone. Her face looked like that of someone who had never shed a tear.

“It. It.. Chief. “, she stammered amidst tears. “He’s cheating on me”, she said and the Sobs intensified.

Jade rested her head on the seat.

‘Lord, have mercy’ was all that came to her mind and heart.

Other stories by Oyinkansola

Remember to leave a comment and subscribe so you can receive subsequent posts notification in your mail ?

Day 4 November 17, 2017 Prayer Culture Shock. That morning was similar to the one the day before…
END_OF_DOCUMENT_TOKEN_TO_BE_REPLACED
0
0
Share
STORIES

Day 3 November 16, 2017 Morning Prayers and Assembly By five in the morning on this day, the…
END_OF_DOCUMENT_TOKEN_TO_BE_REPLACED
0
0
Share
STORIES

Day 2 November 15, 2017 They Pray Too. Very early that cold, dry morning I was woken up by the loud…
END_OF_DOCUMENT_TOKEN_TO_BE_REPLACED
0
0
Share