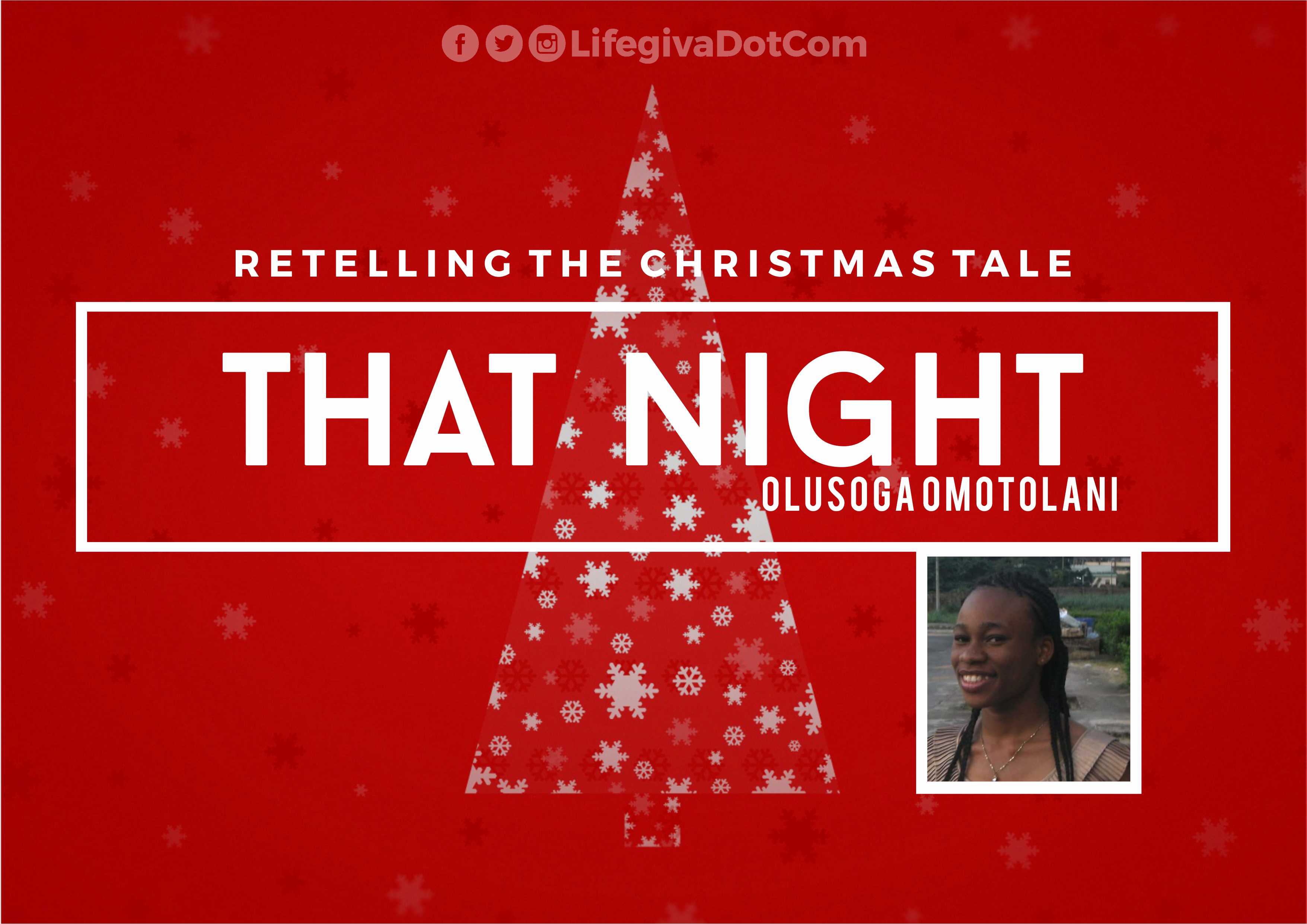 The cold wind whipped through my hair. I pulled my cloak closer, trudging on, tired. The moon stared down at me, flanked on all sides by twinkling stars. I wondered why the Governor had decided to take a census at such a time as this. My wife sat on the horse’s back, looking weary. I smiled at her and she flashed a weak smile back. I knew this must be so hard on her.

We had arrived at my hometown, five hours ago, but had not been able to find any inn to lodge into, not one. Each of the grim faced inn keepers would stare at us blankly and mechanically state that all the rooms were taken. This was all thanks to the census. Yes! The census again.

“Oh no, oh no!”; my wife cried suddenly, interrupting the sound of chirping crickets and croaking frogs.

“What…What’s it?”; I asked, looking up at her face, twisted in anguish.

“I think my water just broke.”

“Blimey! Are you sure darling?”

She answered the question with a shrill scream, releasing breathes in short puffs. Point taken.

I looked around frantically. This could not be happening. Not here, not now. I didn’t even know where exactly we were. Again, I cursed the Governor for deciding to take a census. I pulled the rein of the horse a little tighter urging it on.

She was so sure it was a Him. How strong her faith was, I was not sure about mine.

I saw a looming wooden structure up ahead and pulled the horse towards it. I peered inside; it was empty, save for horses nibbling on hay. I pulled the rein again and led the horse in. I tied the rein to a hanger, then eased my wife off the horse carefully. Her feet barely touched the ground when I lifted her.

It wasn’t much, wasn’t the ideal place, but we really had no other options.

The horses raised their heads in acknowledgement of our presence and continued feeding on their hay, leisurely. I would have given anything to be them at that moment.

I placed my wife on some of the hay on the ground. Her face was a shade redder, while I was confused, probably more scared than she was, if she was scared at all. There was no water, or clean clothes. Plus, there was the fact that I knew nothing about delivering babies!

“Aargh… Please do something”

I threw my hands into the air and bent over her. It couldn’t be too hard, could it? If women could do it, I should be able to do it too. Right?

I heard a giggle and looked up. My wife’s eye held a hint of humour; I shook my head and felt some of my worries melt away. The humour was soon wiped away, as another contraction racked her body.

I nodded my head vigorously. All I had to do was catch the baby, that shouldn’t be too hard.
It probably wouldn’t have been, except that one of the horses decided that it had to eat from the hay my wife was laid upon. Seriously? The whole place was filled with hay, bursting with hay. It could be a hay shop.

I shooed the horse away. It grunted, moved a few paces away and returned. This time, it began to chew on my wife’s hair.

“Ignore it, just focus on catching the child.”

She exhaled. I knelt in front of her, hiked garments and all, with hands ready to catch the baby, while the horse continued nibbling on her hair. I glared at the horse, hoping to scare it away, it ignored me. Apparently, her hair was sweeter than hay and definitely worth my wrath.

“Hmmm”; my wife bellowed as she pushed. She took in a deep breath and pushed again. Then I saw it, a small head, covered with curly black hair and blood.

“The head is out sweetie”; I squealed in a high pitched voice that sounded nothing like mine.

She pushed again and the shoulder came out. I moved closer and held the head.
Nibbly, the horse finally sensed that something important was going on. It stopped nibbling on my wife’s hair, lifted its head and began snorting gently, as though encouraging my wife.

She pushed again and the legs came out. I shouted for joy, the horse neighed and the baby wailed out loud.

I removed my cloak, while holding the tiny, wailing baby with one hand, against my chest, and rent it in two. I used one half to clean the baby and wrapped the other around the clean baby. That was when I saw the manger. I placed the baby beside my exhausted wife and put some hay into the manger.
When I was satisfied that it would be cosy enough, I placed the baby in it.

As I looked into the lad’s tear filled eyes, my dream of the angel came back to me and I had no doubt that this indeed, was the King of the universe.

Day 4 November 17, 2017 Prayer Culture Shock. That morning was similar to the one the day before…
END_OF_DOCUMENT_TOKEN_TO_BE_REPLACED
287
0
Share
STORIES

Day 3 November 16, 2017 Morning Prayers and Assembly By five in the morning on this day, the…
END_OF_DOCUMENT_TOKEN_TO_BE_REPLACED
197
0
Share
STORIES