To Wear or Not To Wear; A Pastor's Dilemma

Since the colonial era, and even after, most of us are used to the English way of dressing; suits and ties for the men, gowns, blouses and skirts for the women, to the point that we have forsaken our traditional dresses, even to its tiniest details. Okay, this is not where I am going. Well, this has apparently influenced dress code on the pulpit. The prestige of the pulpit is that anyone qualifies to be on the pulpit as long as you are corporately dressed in suit and tie, nothing more or less.

Recently, erhm…not too recently though, the social media had serious buzz over Bishop T.D Jakes “breaking the norm” or “going against the ‘bible standard‘”, like some people had it said. Bishop Jakes was seen on a Sunday in Service dressed in ripped jeans. If you ask me, Bishop Jakes was looking so on point. I mean, take a look for yourself below; 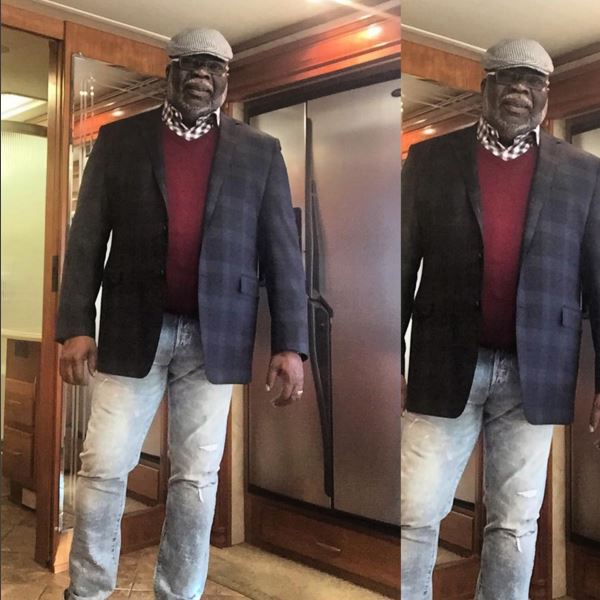 However, lots of people raked and ranted both in agreement and in disagreement over this “new development”. There seems to be a silently loud conflict over what is decent and what is not, per culture, community and society. Let’s take a look at people’s conflicting perspective on this issue;

Speaker 1: If you dislike something, it’s personal not general. But does it make it a sin for those wearing it?

Speaker 2: Most people tend to streamline their principles and beliefs with the word of God…..such that if you are caught or found “guilty”, you are a “sinner”

Speaker 3: They may call him crazy but T D Jakes may call it rugged for Christ. I guess…….. he is the rugged and radical type.

Speaker 4: The problem is that we Christians are so judgmental…. Most (of whom are) not genuinely born again, patterning their lifestyle to that of a particular pastor but truthfully they want to exhibit some craziness in them…. So when someone else (a pastor) does what they could not because of fear, they then nail the person to the cross, saying all sort as if he is the author of God’s law, forgetting to look unto Jesus the author and finisher of faith…. In essence Christ should be our mentor not a minister because we all clay in His hand.

Speaker 5: Since that was not his (T D Jakes) usual style maybe, then he should be able to offer some explanation.

Comment 1: You should not be wearing that particular outfit because it violates the Scriptures.

Jakes responded: Scripture please? I certainly want to comply with the word. I just missed the one about jeans in the pulpit.

Comment 2: I mean the bible doesn’t give us direct counsel on exactly what we should wear to our bible meetings but think about this… We dress better for job interviews and this kind of look would be considered unprofessional, so wouldn’t we always want to display our best for God? Just a thought. Not judging. Everybody has a right to make their decisions on dress.

Comment 4: To the house of God, I would say yes always look your best… After that you could wear whatever you please… You wouldn’t go in ripped clothes to visit the president or queen of England, would you? It’s the level of respect.

In order to make sense of all these crazy buzz, Lifegiva contributors sat around this issue and discussed it at length. Here’s what was concluded upon:

“If we really want to dress as it’s expected of the bishops and levites in the temple of old, we should just simply go back to the way they used to dress in their era, and let’s see how ridiculous we wouldn’t be to one another. There is time, season and era for everything. You can’t be in this IT age and be dressing like you are still under the reign of Queen Elizabeth 1. Decency upgrades overtime. Decency varies with time and season, and even culture. Why are we worried with the wrong things? If we are talking Scriptures, then let’s take a very good look at John The Baptist, who was sent to pave the way for the Master. Can you compare such privilege with the privilege of visiting the Queen of England? Yet, Scripture has it recorded that John adorned himself in a garment of camel’s hair and a leather belt around his waist. That’s just to mention one out of all the Apostles and Prophets. Please, before we use Scriptures to defend and justify our biased principles. standards or sayings, let’s do our homework right first.”

“I hear someone say, ‘don’t you think somethings are not wrong in itself, but because we have gotten to some level of maturity, we shouldn’t partake in them, since it will be ‘disorderly’ among the people, because everything is to be decent and in order?‘ I say “No” to that. Here’s why I said “No”. There was an issue about ladies covering their head in Church…actually about wives covering their head in the Church as a sign of respect for their husbands. Someone brought it up and Paul said, “Isn’t the covering – their hair – that God has given them okay”. Then he reminds the men that their custom, if they want to go by that, also tells them not to keep long hair, yet some of them do so. And then he wraps up by saying, “The Church has no say on this issue”. Yet, many people don’t want to read Scripture in context and be mature enough to let their personal custom’s context go away for peace to reign. We really need to throw away custom and ask if what is been done is really offensive to God. Maturity is not letting everybody box you in. If at all you let them box you in for a while, it is because you who are spiritually mature are lifting others up to your maturity level too, correcting them with gentleness. What exactly is wrong with ripped jeans? Are we going to throw it out because some people are gone extreme on it?”

If you are still looking for a balance to decency and orderliness, and are still not sure whether Bishop Jakes’ outfit is against God’s “Ten Commandments” or the Standards of Scriptures, after all that has being said, just remember this: stay off extremism. Being an extremist only qualifies you as a very guilty person who takes what is good in its natural state and make’s it look bad. Thus, in whatever we do, whether putting on our Sunday’s best or work mode, let’s stay off being an extremist.

Spread the Word. There’s nothing wrong in a Pastor or Bishop looking his Sunday’s best in an excellently fashionable way. Take a closer look at Bishop T.D Jakes, and honestly tell me this isn’t on point!

Recently, popular Actor and movie producer- Yul Edochie, announced on social media that he has a son…
END_OF_DOCUMENT_TOKEN_TO_BE_REPLACED
3
1238
16
Share
Faith

There are a good number of great women in the bible. We all know Esther, Rahab, Sarah, Deborah, and…
END_OF_DOCUMENT_TOKEN_TO_BE_REPLACED
2
1418
14
Share
Faith