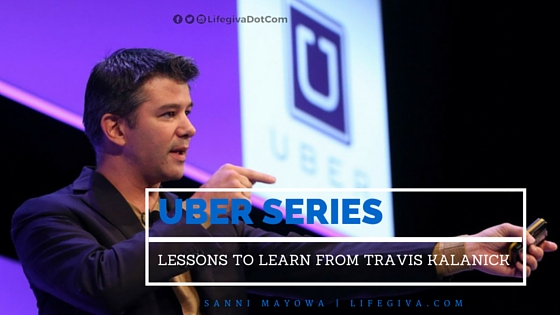 Today, I’m going to introduce you to my favorite business icon. Writing about him is a great privilege for me as he is very dear to me. As such, I invite you to sit back, fasten your belts, and enjoy this journey with me.

My guess is that you have heard about Uber (that fancy ‘cab service’) right? I can also bet that you most likely have not heard of Travis Kalanick, right?  You see, without Travis, none of us would have known or experienced Uber.  So who is Travis Kalanick?

As you probably might have figured out by now, Travis is the co-founder and CEO of Uber. Worth $6.2B, he is a 39 year old tech entrepreneur and the 188th richest person in the world. That’s definitely not a bad profile to have!

In 1998, Travis Kalanick, along with some other classmates dropped out of UCLA to help start Scour Inc., a multimedia search engine with Dan Rodrigues. They also started a peer-to-peer file sharing service called Scour Exchange. Although Travis’s drop out story was not as popular as that of Steve Jobs and Bill Gates, he was a school dropout nonetheless. In his case, dropping out was a necessary decision for him especially in the face of instances such as when he kept getting $1M calls from investors while in the lab on campus. In those situations, he had to leave school and pay his classmates to do his assignments. Even after his decision to leave, he did so with the intention of going back even though it never worked out that way.

Before Travis found great success, he experienced plenty failures. He once said in a meeting that he was sure nobody in that meeting had experienced more failures in life than him. Even after such hige successes, the battles keep coming. This leads me to one of the rhinfs o admire in him, Travis is a fighter. He views challenges as daily meals as I will discuss in my next write up.

To conclude with this first series, I will leave you with some of his quotes.

“The most important thing is to create a company that wants to invent, create and make a difference”

Fear is the disease, hustle is the antidote, whatever it is that you afraid of, go after it Click To Tweet

“If you bring that scrappy fierceness with you, it works until you get big, when really pushing all the way really feels uncomfortable…When you are the little guy that’s lauded, that’s heroic”

Thank you and feel free to comment on anything you know about Travis.

It’s a few days to the end of 2021, and I’m sure many people are excited and expectant…
END_OF_DOCUMENT_TOKEN_TO_BE_REPLACED
0
814
3
Share
FaithInspirationLife

It’s the 25th of December! The time of the year to celebrate the birth of the saviour Jesus…
END_OF_DOCUMENT_TOKEN_TO_BE_REPLACED
0
484
8
Share
FaithInspirationLife

The Apostle Peter is an iconic symbol in the Christian faith. He was one of the twelve apostles…
END_OF_DOCUMENT_TOKEN_TO_BE_REPLACED
0
690
5
Share