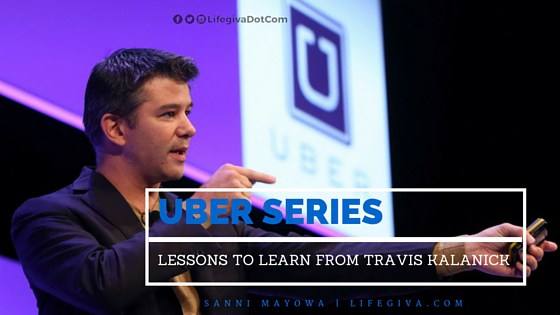 I guess you done now, and everyone is set for this second journey. Now we talking about Travis, CEO and Cofounder of Uber, by the way, Uber just secured a round of investment worth $3.5billion, which gives Uber a post market value of a whopping $62.5billion, and also gives them more than $11billion on their balance sheet. This is really big deal, for a company not up to 6 years!!!!

Ok so about Travis, I wanna discuss something about him, Travis is a fighter, and I like that spirit in him. I gave some quotes of Travis in the last write up, I will start from one of them, which says;

If you follow the tech world closely, and the development story of Uber so far, you would understand what that quote means. Uber has had such a magnificent growth and expansion record internationally. As of May 28, 2016, Uber operates in over 66 countries and in over 449 cities worldwide! As at last year’s Christmas Eve, Uber had its 1 billionth ride!! And currently they have an average of 1.25 million rides per day!!!

You can agree that this is really a company that dominates wherever it goes, but the dominion hasn’t been easy, Travis and Uber have had a lot of fights to undertake. It’s not been an easy ride. As Uber grew internationally, it began to experience disputes with several governments and taxi associations. The fight has been majorly from the taxi guys, because they see Uber as someone who’s stealing their bread, lol (innovation always win at the end of the day).

Uber has been sued on several occasions, to the extent that Uber spends hundreds of million dollars annually on law and legal services. Uber has been banned in some states, Uber riders have been physically attacked, like in Paris. Let me give you more detailed examples:

On June 11, 2014, in a concerted action, taxis blocked roads in major European cities in protest against what they perceive as a threat to their livelihoods from companies such as Uber. The cabbies contended that Uber and similar smartphone app-based services have an unfair advantage because they are not subject to the same kinds of fees and regulations placed on taxis.

On June 25, 2015, cab drivers in Paris “locked down” Paris in an anti-Uber protest. Musician Courtney Love got caught in the protest and live tweeted as her Uber cab was violently attacked and she and her driver were held hostage.

On July 24, 2015, a thousand taxi drivers in Rio de Janeiro blocked traffic during the morning rush hour protesting Uber’s expansion there. (Lawmakers have voted to ban Uber in São Paulo and Brasilia.).

On August 21, 2015, Uber started operations in Costa Rica. That same day the government asked the taxis for “help” to locate all Uber drivers. This call resulted in traps set by the taxis and even the vandalism of an Uber driver’s car. Uber stated that it will help and pay for all the inconvenience caused to their drivers.

On November 26, 2015 an Uber driver was beaten by taxi drivers in Brazil, and similar attacks followed.

On 22 March 2016, thousands of taxi drivers in Jakarta demonstrated against Uber and a similar service, Grab. Several places were targeted during the protests, including the Indonesian Presidential Palace, the People’s Council Building, and the Ministry of Communication and Informatics central office. Taxi drivers accused that Grab and Uber were causing them to receive smaller daily incomes due to the rising number of app users. The demonstrators also demanded that the government ban the apps and issue a governmental decree concerning this problem.

There’s a saying by Charles Kettering and it goes thus ‘the price of progress is trouble.’

This is just a little picture of what Travis faces, but you need to hear him speak, he’s not a bit worried, he is ready for every challenge, he loves them, when you hear him speak, you listen to someone who believes he has something he can change the world with. And he is doing it one ride at a time.
What are you into, what challenge are you facing in your business, remember Travis, ‘know what’s right, fight for it, don’t be a jerk’.
Let’s call it a wrap on the second part in our UBER SERIES; LESSONS TO LEARN FROM TRAVIS KALANICK. Rememeber to read Part 1 by CLICKING HERE.
Kindly be on the lookout for the next part 😉

It’s a few days to the end of 2021, and I’m sure many people are excited and expectant…
END_OF_DOCUMENT_TOKEN_TO_BE_REPLACED
0
716
3
Share
FaithInspirationLife

It’s the 25th of December! The time of the year to celebrate the birth of the saviour Jesus…
END_OF_DOCUMENT_TOKEN_TO_BE_REPLACED
0
434
8
Share
FaithInspirationLife

The Apostle Peter is an iconic symbol in the Christian faith. He was one of the twelve apostles…
END_OF_DOCUMENT_TOKEN_TO_BE_REPLACED
0
618
5
Share