Trending
Dear Struggling Believer Should I Quit My Job To Pursue My Passion? Healthy Ways To Deal with a Breakup Five Ways to Fight Sexual Sin How to Maintain a Vibrant Spiritual Walk
LifeNewsVideos

WAR ROOM: THE MOVIE (A REVIEW)

Ever since I totally surrendered my life to Christ, I have become very picky with my choices of media products. From movies to songs to even blog articles, I became really picky. Of course, Alex and Stephen Kendrick’s films have always been a favorite- from fireproof to courageous, from Flywheel to facing the giants.  When I heard that a latest movie was out (produced by Alex and Stephen Kendrick of course), I became so interested and elated.

I began downloading pictures on twitter and following Priscilla Shirer who was the major character. When I finally got a hold of the movie, I had to wait till all pending tasks were completed. That afternoon, I settled down with no ice cream, no popcorn but just a heart ready to receive. And I was blessed.

The movie centered round Elizabeth Jordan (Priscilla Shirer), a real estate agent.  Her husband, Tony Jordan (T.C Stallings) seems unavailable emotionally and physically- as he travels a lot due to the nature of his job.  Her daughter, Danielle (Alena Pitts) constantly seeks for her parents’ utmost attention, and is obviously sad she is not getting it along with the recurring fights between her parents.  Elizabeth then meets Grandmother Clara (Karen Abercrombie) who needs to sell her house and get a house without stairs. This meeting marks the beginning of an evolving of Elizabeth, as Grandmother Clara introduces her to the “war room”, the prayer strategy, the truth of grace, divine love and forgiveness, and being intentional about God and it makes Elizabeth realize that “very few persons know how to fight the right way or understand who they really fighting against”. As Tony begins to slowly tread the path of infidelity and mischief, Elizabeth uses the prayer strategy and her War Room to win the hearts of her husband and her daughter to the Lord. In the end, it is evident that “prayer changes things”.

This movie is a fine blend of comedy with emphasis laid on the subject of prayer. A scene that caught my attention was where Grandmother Clara laid emphasis on the “lukewarm” Christian with a cup of lukewarm coffee. As Elizabeth tasked it, she literally almost spat it out of her mouth? “Who likes lukewarm tea?” you ask. But then, the Lord will “spit out every lukewarm person from His mouth”. We also see Elizabeth’s comic self come to play especially when she decides to eat chips in her closet, or her non verbal expressions whenever she is conversing with Grandmother Clara (YOU NEED TO WATCH THIS MOVIE).

War room exposes us to what prayer can do. As much as going to church is important, prayer is also important and should not be sidelined on the altar of “I have no time” or “I am usually too busy”. You make out time for what is most important to you, and besides, prayer should be the lifeline of every Christian. Men and women we see who seem to live victorious lives have fought and are still fighting wars on their knees. Many battles we face today as Christians can be averted on the altar of prayer and with a heart of absolute faith in God and knowing that He answers when His children call (Jeremiah 33:3).

While the movie was not as “ghen ghen” as I thought it would be, it subtly exposes every viewer to the need to pray always. The characters played their roles so well, no character was left out when it came to excellence in interpreting the roles they were given. The story line was very direct and straight to the point without ambiguity, and it could be seen that the writers of the script had one thing in mind- “to vocalize the importance of prayer to every viewer”. 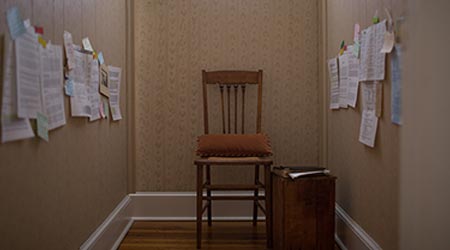 I decided to do something after watching this movie. I created my own “War Corner”. Forgive me if that sounds cliché, but every morning I began sitting on a chair at the corner of my room to pray. Some days I would fall asleep and almost hit my head on the ground, and some days I would blatantly just go back to bed. But on other days, I would sit, write in my prayer journal and pray. As far as I am concerned, starting something is the first step to being successful at it, and is the best step to finishing it. How do you get to finish if you never start?

I recommend this movie to anyone…I mean anyone…I mean, Christ loves everybody- we just have to make the choice to be for Him individually. Your life will not remain the same if you open your heart to the message this movie carries.

You can never win a battle if you don’t fight. And sometimes, praying is all the fighting you need to do. Click To Tweet

War Room: You can never win a battle if you don’t fight. And sometimes, praying is all the fighting you need to do. Remember, we do not wrestle against flesh and blood…we do not wrestle against our fellow humans, but against principalities and powers. What better way to win do you have in mind? I say…get on your war clothes, shut the door, get on your knees and pray your way to your breakthrough.

To win any battle, you’ve got to have the right strategy and resources because VICTORIES DO NOT COME BY ACCIDENT. Click To Tweet

Work on your Second Place Smile

“I am not pulling out of this competition! I suggest you work on your second place smile cos…
END_OF_DOCUMENT_TOKEN_TO_BE_REPLACED
3
0
11
Share
FaithTrust Me I've TriedVideos

Trust Me I've Tried To Forgive

One of the hardest things to do is let go of someone who has hurt you. At some point in our lives…
END_OF_DOCUMENT_TOKEN_TO_BE_REPLACED
0
0
2
Share