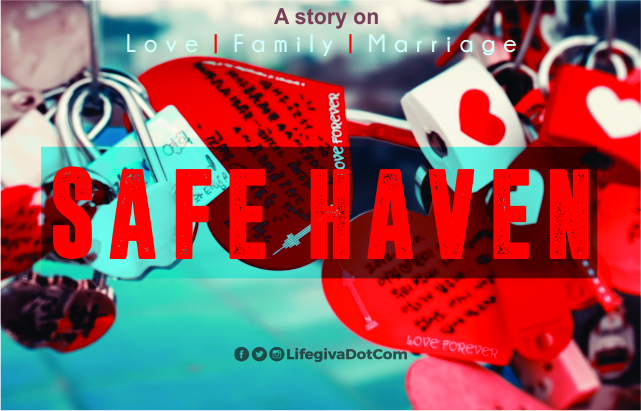 TWO WEEKS LATER…
Priscilla entered the familiar house and expelled a deep breath from her long walk. Mrs Bridget sat in the veranda fanning herself because there was no electricity; she went to join her, slumping into the cane chair. Priscilla closed her eyes briefly; she tried shutting out thoughts of the past week but they remained there stubbornly etched to the back of her mind.
“How are you holding up?”, Mrs Bridget’s motherly tone came through her wandering thoughts. Priscilla shrugged in response, “I’m okay.”
“Is it a bad time to talk about something or what?” She sounded very cautious.
“About what?” She sat up a bit; her face looked drawn and tired.
“Tunde called me…” Priscilla rolled her eyes before Mrs Bridget continued “Wait… wait, let me continue. He said he’s been trying to reach you and you’re not picking up.”
“I… have not been able to talk to him” she closed her eyes briefly, “I can’t seem to forgive him.”
“He wants to see you”, she replied gently and Priscilla squirmed in protest. “You have to Priscilla; sooner or later you have to face him.”
“Well not now Mrs Bridget”, Priscilla spoke in a controlled voice “I don’t want to see him, I find myself blaming him for this and I’m set on a divorce”, her voice shook at that.
“You really think he’s at fault?” Mrs Bridget replied in a levelling tone.
She shrugged again not wishing to explore the conversation further. “I need time to myself, I feel like I’m suffocating”, Priscilla continued with a gesture. “I can’t do this anymore, now the baby is gone. It’s time for changes…”
“I think he’s hurting,” the older woman said in a sympathetic tone
“We’ll let him!”, she snapped unknowingly. “He gave me an ultimatum,” Priscilla continued tearfully “…and he just stood there expecting everything would be okay and we could go back to being happy?  I can’t live with a man that can’t accept my mistakes.”
“He was hurting too, Priscilla.”
“…and so was I” Priscilla’s voice rose, with an effort she tried to calm herself “I’m sorry. I was hurting too Mrs Bridget, I-was-hurting-too!” she ended emphasizing her point “I lost my baby because of everything”, Priscilla concluded sadly.
“I understand and I hope you figure things out dear,” Mrs Bridget concluded gently.
“I’m thinking of travelling to meet my sister in two weeks” she shook her head as if to shake off the hurt. “I need time to figure things out.”

Tunde packed the last of his belongings stacking each box on the table; he sighed and leaned on the large oak table overlooking the large windowpanes. He looked up at the skylines from his office taking in a deep breath in his troubled heart. He had expected to come in and pack up in a swift movement but it turned out to be more emotional than he thought after seeing the gloomy expression on his secretary’s face.
He so badly wanted a glass of bourbon. He felt so numb, he needed something to warm him up but he found himself content to watch the plain sky; he thought of Priscilla, worrying about how she was, what she did, whom she cried to. A long low sigh escaped his lips as he thought of how many calls, how many texts he had sent and no reply. Maybe she truly meant it when she said she was done.
Tunde slid his hands into the pocket of his trousers as if to quell his anxiety; he was convinced he had lost her and he grieved for it, he constantly blamed himself for his stupidity.
Maybe it was time to let go, see the world from a different perspective, know himself better, and start over. He had been offered a good job in Abuja; it was time to consider it before the window closed. Did he really want to do it? Be the one to pull the plug on them? She gave up on them first and he pushed her to that point which he doubt he could bring her out of and he loved her so much, he felt lost. Tunde brought out his phone from his pocket and stared at it for a long time. He dialed Priscilla’s number again heart in mouth praying she would pick up but she did not.
Tunde choked back a loud sob and closed his eyes tried to calm himself. He didn’t want to do this but he had no choice, if he really loved her he was to let her go right? He was to let her be; the way she had always told him, she wanted to be free. A tear escaped from his eyes and he cleaned it off with a free hand trying to be strong.  Tunde snapped his eyes open. The next number he dialed was his lawyer.

Priscilla parked in front of her mother’s house reluctant to go in. She sighed and leaned back on the chair for a minute, the car was silent and she welcomed it now more than ever. Her mind flashed back to when her mother surprisingly called that she should come pick up a package, her tone staccato. She decided to dress her best and come straight ahead; she knew that regardless of her weight loss she looked good.
Finally, she gathered her will and came out of the car straightening her flared dress, it took Priscilla a minute to walk into the compound and knock on the door. It opened almost immediately and she stood staring her mother in the face. Her mother said nothing and stood aside giving her room to walk through.
Priscilla walked in and drank in the familiar look of the house, the scent of it. “You said there was a package for me” There was no greeting, no warmth. It was just a cold feeling between them.
“Yes”, Sola replied defiantly, her jaw was set in a stubborn line as she stood beside the door. “It’s on the centre table” she watched Priscilla go pick up the sealed large brown envelope.
Priscilla eyed the envelope for a minute wondering who had sent it “Where did it come from?” she asked looking at the woman she had known as her mother.
Sola shrugged “It’s one of those DHL boys” she watched Priscilla nod still staring at the envelope.
Priscilla walked towards the door and stopped before opening it to look at Sola.
“Imabong called” she saw the faint look of surprise on the older woman’s face.
“What’s that to do with me?” Sola asked maliciously.
“She’s your daughter”, she replied softly and Sola threw her face away “we’ve been talking. She said to greet you” her mother did not reply and she felt a surge of pity for her “How have you been mother?”
Sola looked at her scornfully “I’m not your mother.” Her tone was sharp and she knew she hurt Priscilla saying that.
“I just wanted to know how you’ve been living. So many things have happened to hold on to our quarrel”, Priscilla spoke fluidly ignoring the stab of pain that filled her heart.
“I’ve been living on my pensions, I’m happy now” Sola replied in a clipped tone “More so now that I heard your husband’s father is in jail for what her did.”
“What he did?” this time Priscilla was surprised.
“You didn’t know that?” her mother mirrored her expression “I suppose you and that boy are no longer together.”
“What happened?” Priscilla asked again not willing to divulge information to the woman.
“He was arrested for a pansy scheme” her voice was on edge “He swindled so many investors that man, including your father.”
“My father?” her heart skipped a beat.
“Yes, your father.” Sola snorted in disgust “You and Tunde were clearly destined to be enemies before you were born.”
Priscilla said nothing and opened the door taking in a deep breath “I’m going to be gone for a long time” she said in a small distant voice. “If you need anything please call me.”
“Why should I call you?” Sola asked sharply eyeing her with dislike
Priscilla looked into her eyes and smiled softly ignoring the bitterness lurking in them. “Because I forgive you”, she replied in a husky voice full of emotion. “I forgive you for everything.” With that, she walked away thinking of her own lost baby.
The moment she entered the car she drove forward not wanting to wait a moment longer, her eyes were laced with tears thinking of the woman she left behind. She did not want to spend the rest of her life bitter. No, not that way, bitter and alone. Maybe it was time to make amends; her heart went out to Tunde.
Even in her anger and with the fact her thoughts of him grew more distant, she still missed him in a helpless way, maybe he would call again and she would pick it. Her eyes trailed to the envelope on the passenger’s seat as Priscilla turned to the main road and she parked in front of a closed shop reaching for it in curiosity.
She opened the light envelope and brought out the paper contents; shock was the first feeling then disappointment and hurt. Priscilla’s eyes began to water as she read the contents of the documents through blurry eyes. She broke into a helpless sob; maybe he would never call again, maybe she had finally lost Tunde. The divorce papers slid down her weak hands.

Read Excerpt; The Eclipse Of he Son

Day 4 November 17, 2017 Prayer Culture Shock. That morning was similar to the one the day before…
END_OF_DOCUMENT_TOKEN_TO_BE_REPLACED
317
0
Share
STORIES

Day 3 November 16, 2017 Morning Prayers and Assembly By five in the morning on this day, the…
END_OF_DOCUMENT_TOKEN_TO_BE_REPLACED
226
0
Share
STORIES